EDISON PARK — Ald. Mary O'Connor (41st) and Chicago Firefighter Anthony Napolitano tussled over the city's looming pension crisis and the jet noise blanketing the Far Northwest Side during the first and only 41st Ward runoff debate.

O'Connor, who is seeking a second term on the City Council, said the most important issue facing voters in the 41st Ward is the threat posed by what she contends is the city's "$17 billion pension debt."

While O'Connor accused Napolitano of having no real plan to address the issue, Napolitano said the reforms O'Connor said she supports would hurt city employees like himself and his family members who paid into their pension accounts twice a month for years. 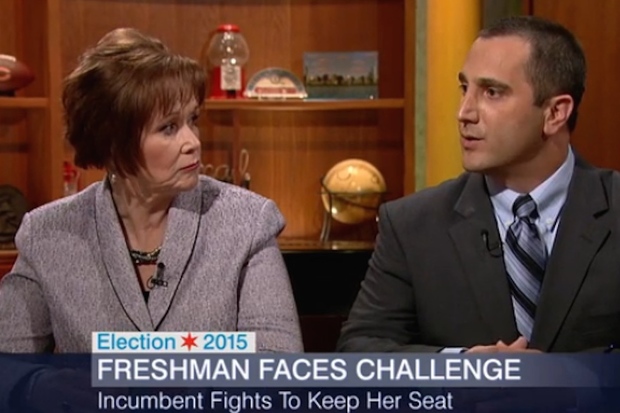 "This is my problem," Napolitano said. "This is my father's problem, my relatives' problem. I want to protect these pensions."

The two candidates frequently interrupted each other and tried to talk over each other in the approximately 10-minute debate hosted Wednesday night by WTTW's Phil Ponce on Chicago Tonight.

Napolitano said he supported a large Las Vegas-style casino Downtown to bring in new revenue for the city, and also wants the city to sell the vacant and abandoned land it owns to add to the city's coffers.

Napolitano said he also favors using some of the $1.7 billion in the city's Tax Increment Financing District funds to address the "major crisis" created by the state Legislature's requirement that city to make a $550 million pension payment to police and fire pension systems by 2016, which would force officials to either drastically cut services, raise taxes or borrow a significant amount of money.

O'Connor said the pension system should be reformed to reduce annual cost-of-living increases paid to retired city workers and to reduce benefits for workers still on the job. Once the system is reformed, O'Connor said she would consider raising property taxes.

Napolitano ruled out a property tax hike under any circumstances.

O'Connor became exasperated with Napolitano during the debate, shaking her head and referring to Napolitano by his first name several times to contradict him.

"Anthony, you constantly don't have your facts straight," O'Connor said.

O'Connor and other aldermen twice called for federal and local aviation officials to appear before the council to answer questions, only to have their demands go unanswered.

Napolitano said holding a hearing was the bare minimum residents should have expected from their alderman.

O'Connor said she has worked to have three new noise monitors installed in the 41st Ward and pushed airlines to phase out their oldest, noisiest planes.

O'Connor won won 47.7 percent of the vote on Feb. 24 and Napolitano won 42.5 percent, according to the Chicago Board of Election Commissioners. 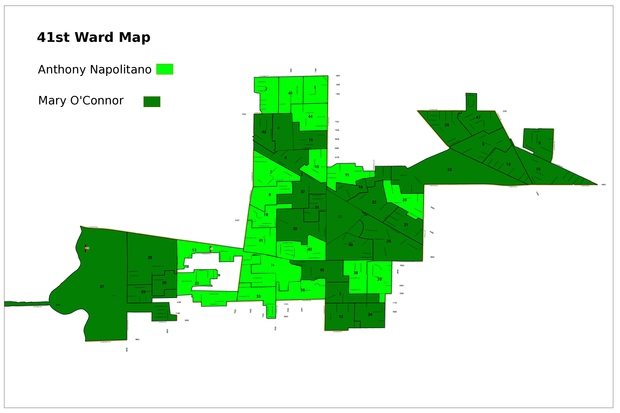 Napolitano ran strongest in the center of the ward in Norwood Park and Edison Park, where he lives with his wife and three children.

In precinct No. 5 in Edison Park and precinct No. 22 in Norwood Park, O'Connor won the most votes by less than a percentage point, results show.

Former Ald. Brian Doherty, who resigned after serving 20 years on the City Council representing the 41st Ward, was one of Napolitano's precinct captains. Doherty was the lone Republican at City Hall for most of his tenure.

Napolitano, a first-time candidate, said he reached out to Doherty for advice and help when he realized he needed help setting up his organization.

"In no way shape or form is he running our campaign," Napolitano said in an interview with DNAinfo Chicago.

Doherty, who ran unsuccessfully for state senate in 2011, said he joined Napolitano's campaign after being impressed by Napolitano's tenacity and record as a pro-union Republican.

"I'm a foot solider," Doherty said, adding that he thought Napolitano would be a much better alderman than O'Connor, who has voted with the mayor more than 90 percent of the time. "He won't roll over for the mayor."

The most recent votes that O'Connor cast against a proposal from the mayor cost her the support of the Service Employees International Union, which endorsed Napolitano. In the 2011 election, the SEIU spent $80,000 to help O'Connor win.

The union was angered by O'Connor's decision not to oppose Emanuel's decision to fire custodial workers at O'Hare Airport represented by the union and replace them with non-union employees, said SEIU State Council Executive Director Gerald Morrison.

But the final strike against O'Connor was when she voted in December to oppose a plan to raise the minimum wage from $8.25 to $13 over five years, Morrison said.

During the council debate, O'Connor said the hike would hurt small business owners like herself who treat their employees like family.

"That's when we decided a Republican firefighter would be better than a Democratic alderman," Morrison said, adding that the union even made a television ad criticizing O'Connor's vote on the issue. "We made a mistake supporting her the first time."

O'Connor has been endorsed by the Chicago Federation of Labor and eight other unions.

Napolitano, who was endorsed by the Chicago Republican Party, got $3,000 on Feb. 19 from the Illinois Opportunity Project, which is affiliated with Dan Proft, who ran for governor as a Republican, according to records filed with the Illinois State Board of Elections.

O'Connor called on Napolitano to return those contributions, saying they are from groups committed to "union busting."

Despite SEIU's switch, O'Connor continues to have a financial advantage over Napolitano, reporting at least $42,500 in contributions since Feb. 24, according to records provided by the Illinois State Board of Elections.

During that same period, Napolitano reported $31,500 in contributions, all but $3,500 from labor organizations representing police officers and firefighters, according to state records.

Registration and early voting will take place at 50 other locations around the city through April 4. Voters must show two forms of identification to register, and one to vote, officials said.

Through Thursday, 2,428 residents of the 41st Ward had voted early — the most of any Chicago ward, according to the Chicago Board of Election Commissioners.